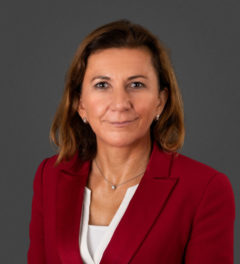 With more than twentyfive years of experience, Laurence Mulliez has been a Business leader and CEO in different business sectors from banking to consumer products to energy, chemicals and industrials, living in four different countries and leading businesses in over 30 countries.

From 2007 – 2010, Laurence Mulliez held the position of CEO of Castrol Industrial Lubricants and Services worldwide and from 2010 to 2013, Laurence was the CEO of Eoxis, a start-up producing power from wind parks and solar farms.

Laurence has a degree in Finance from Sup de Co Rouen- France, and an MBA from the University of Chicago (Booth) –USA from 1992.