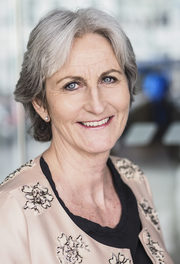 Vibeke Hammer Madsen is educated as a radiographer and has extensive management experience. Since 2002 until november 2018, Madsen has built and led Virke, the Enterprise Federation of Norway. Before this, she was a Partner in PA Consulting Group and she was director in Statoil Retail. Madsen has had a number of directorships, among others in VG, Kværner ASA, Forskningsrådet, Aker Solutions ASA and Aker Floating Production ASA. Appointed board member on 18 June 2018.